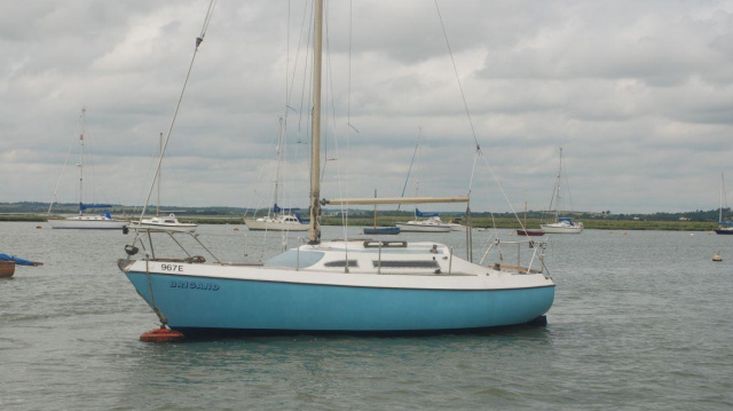 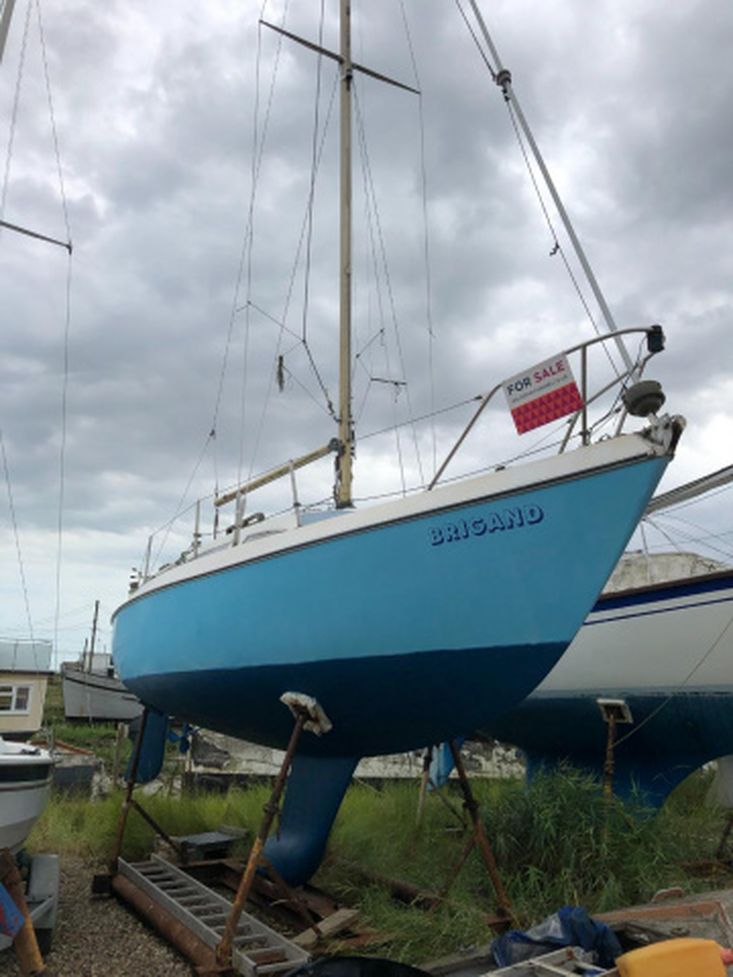 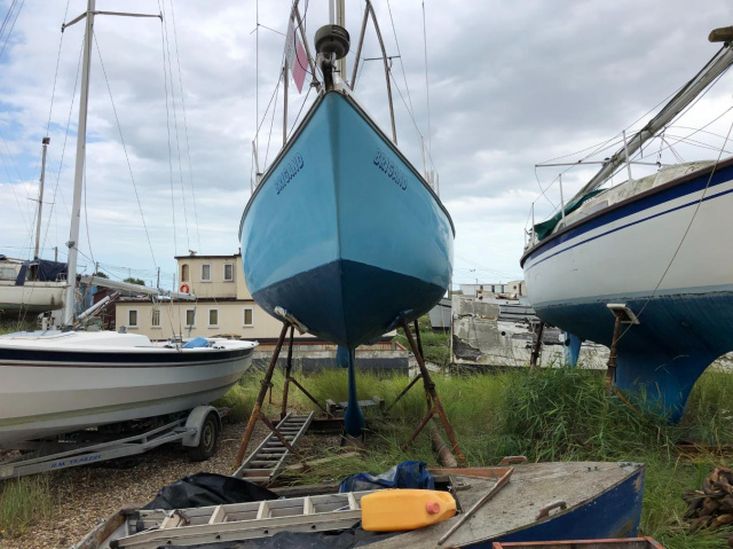 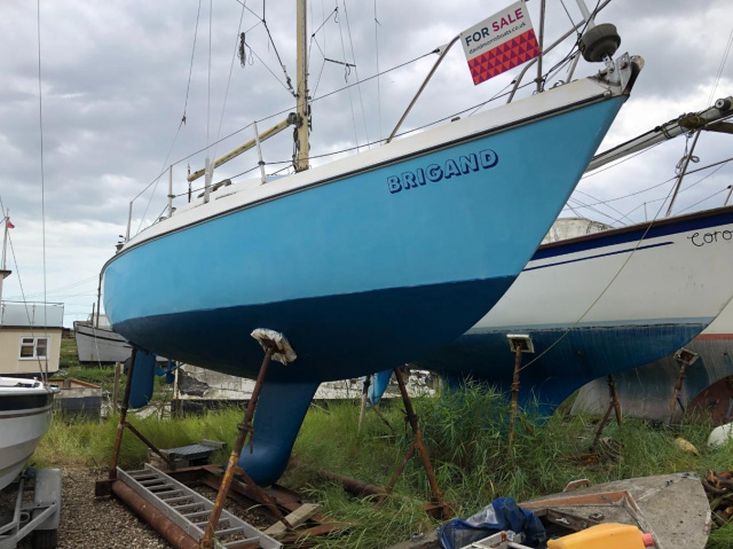 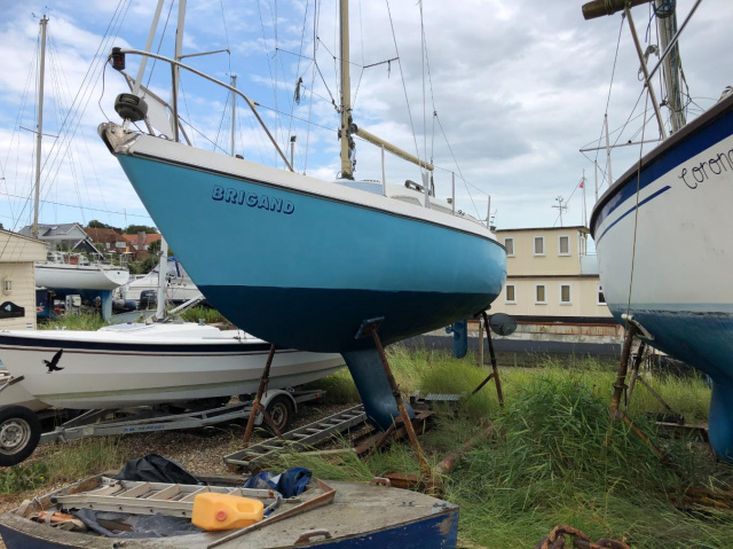 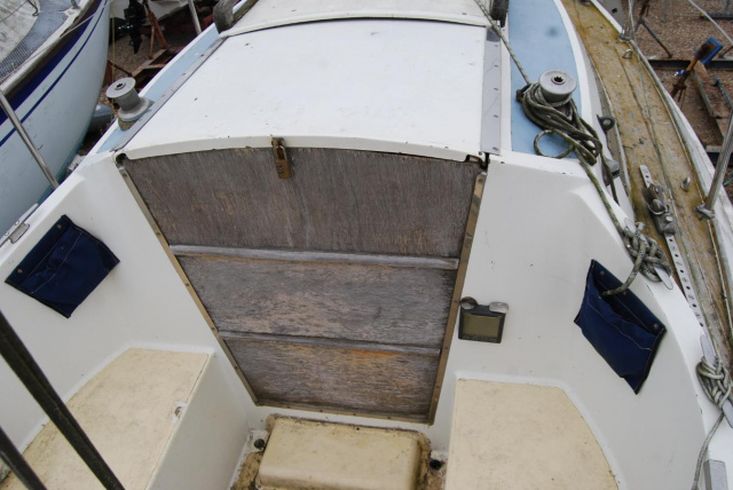 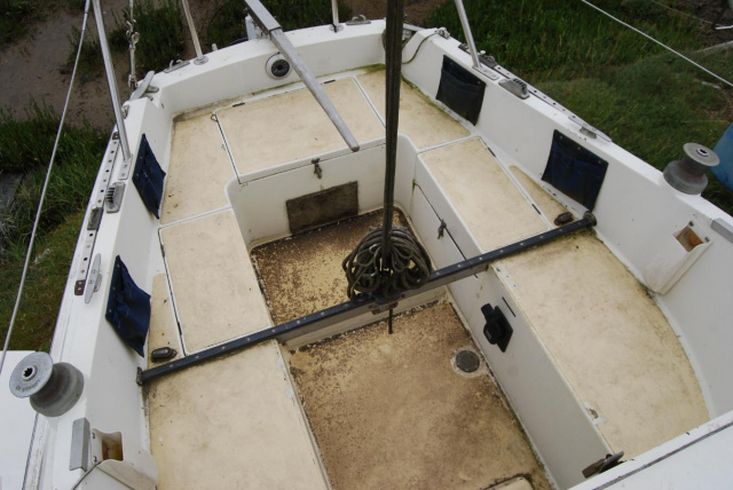 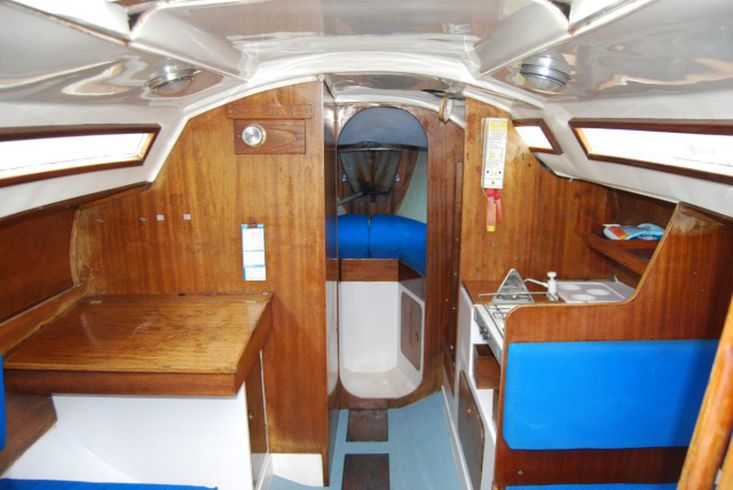 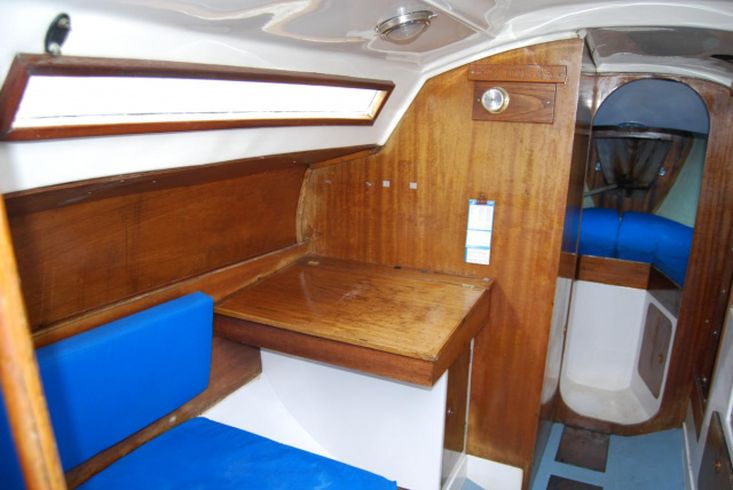 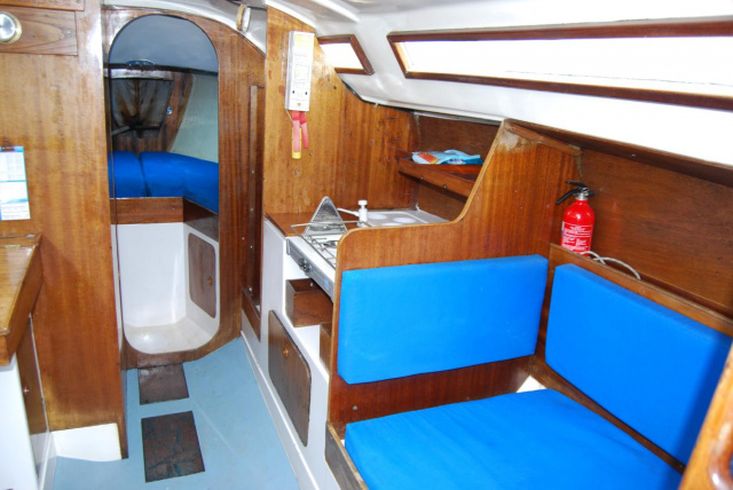 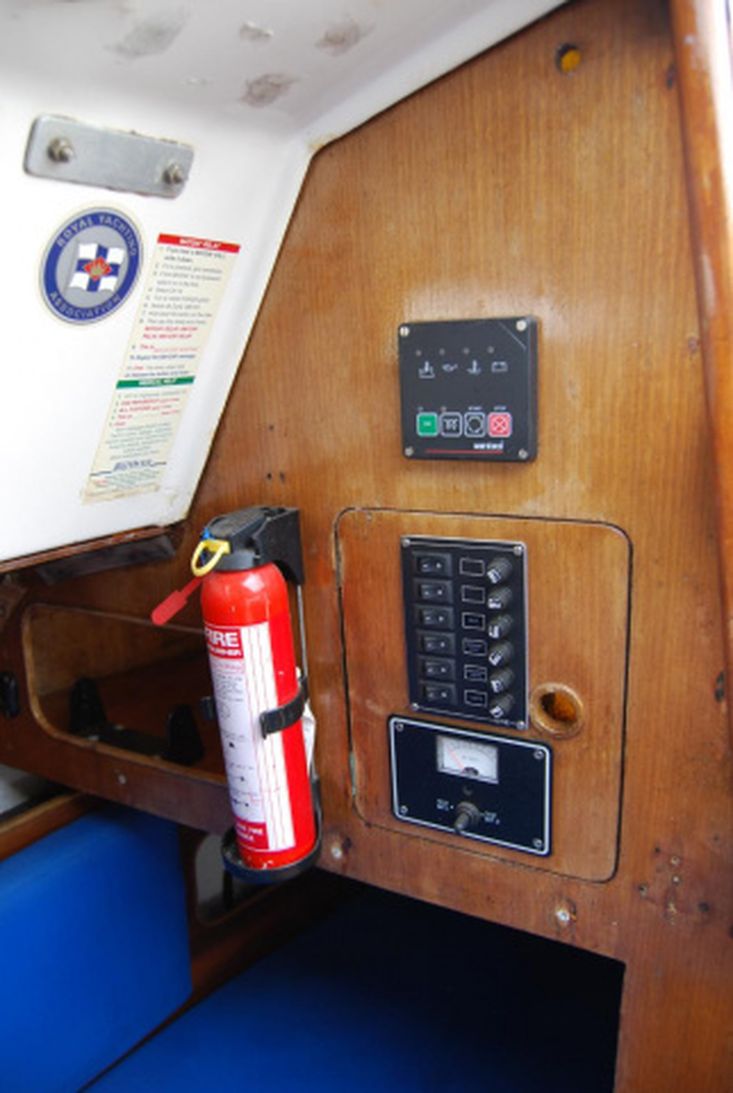 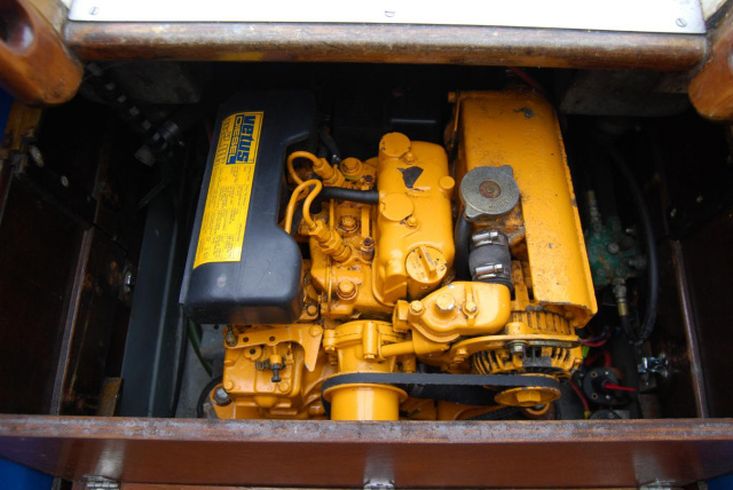 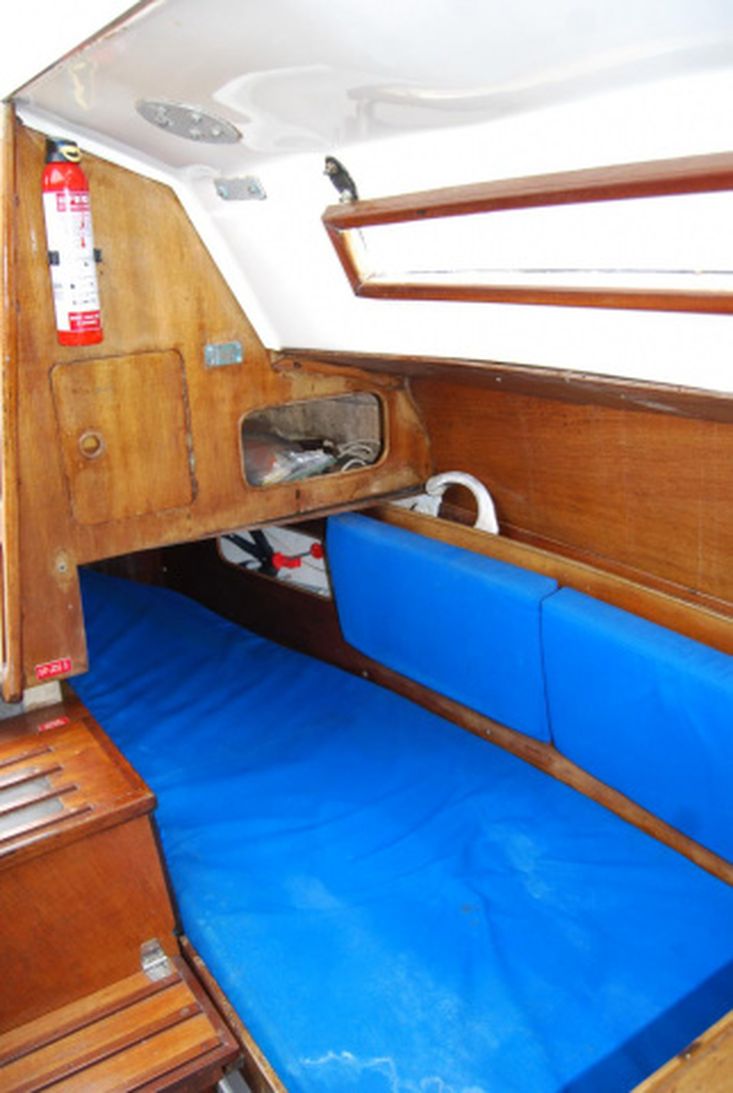 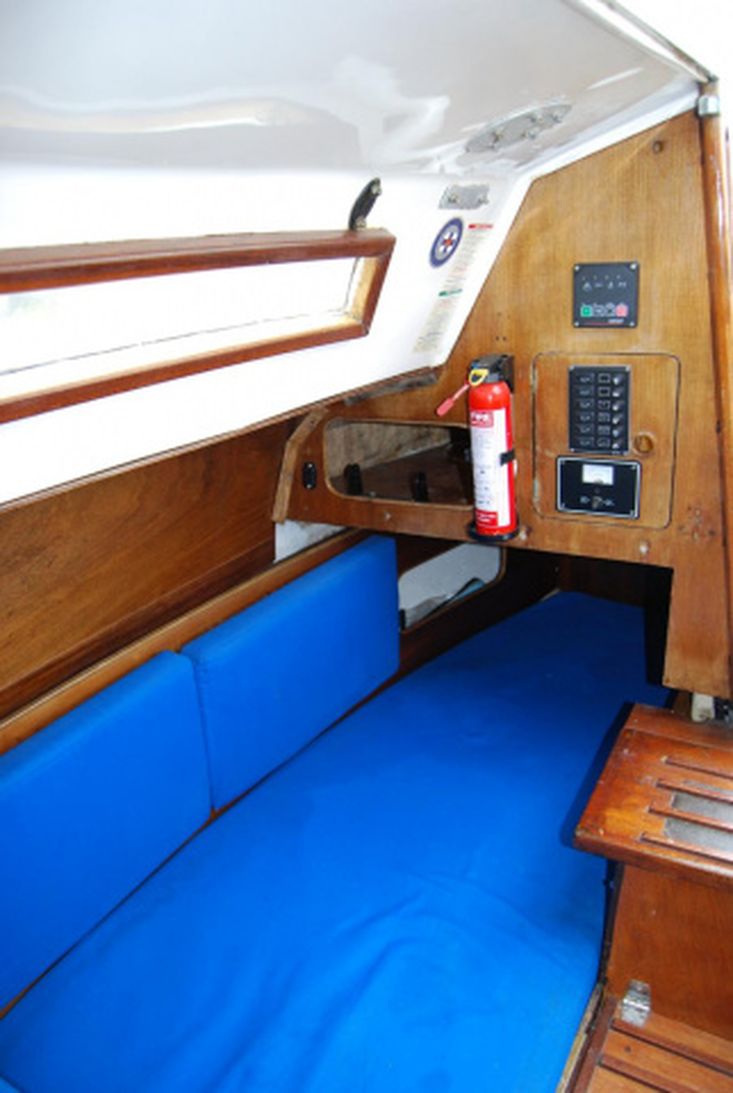 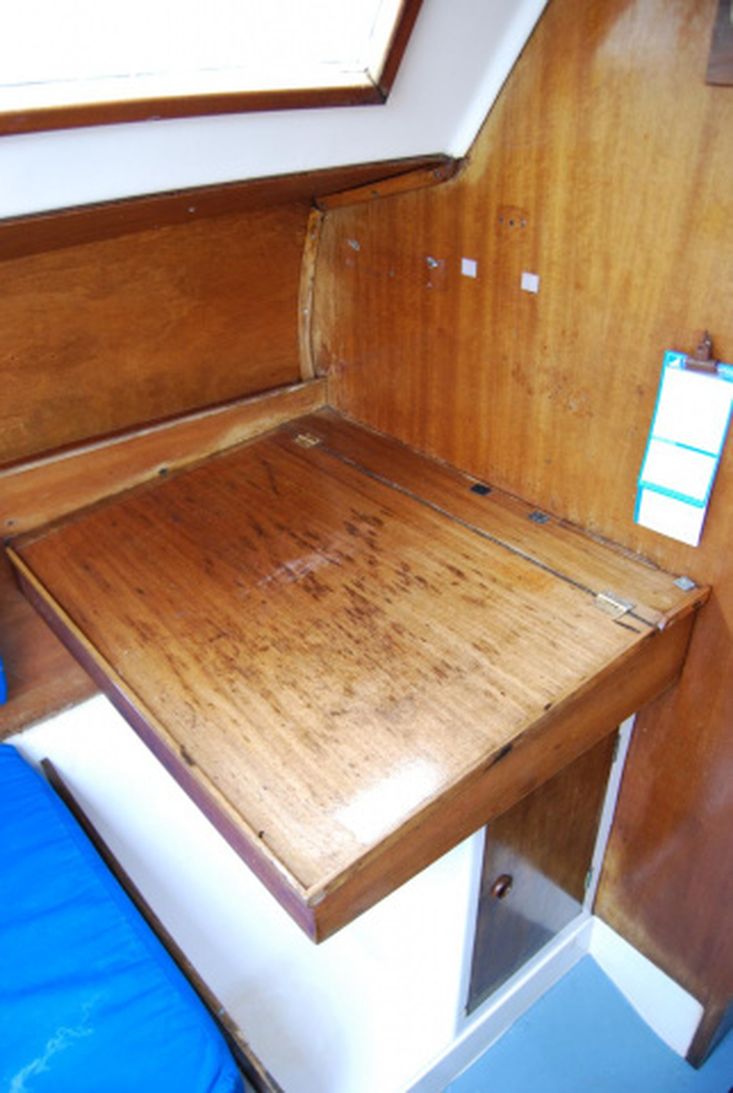 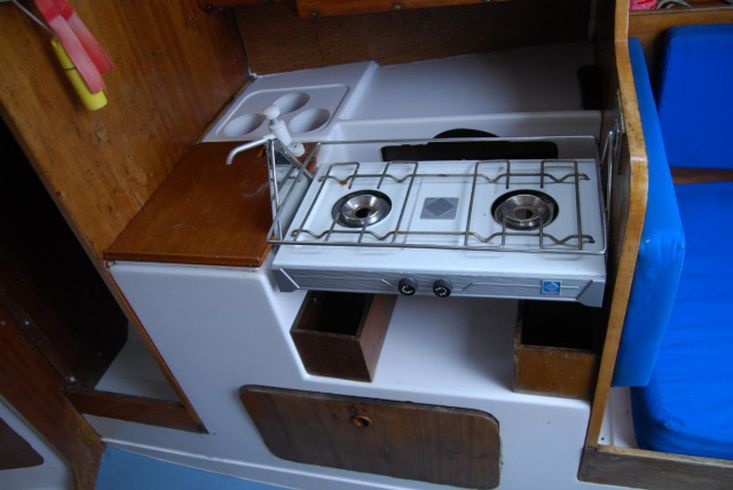 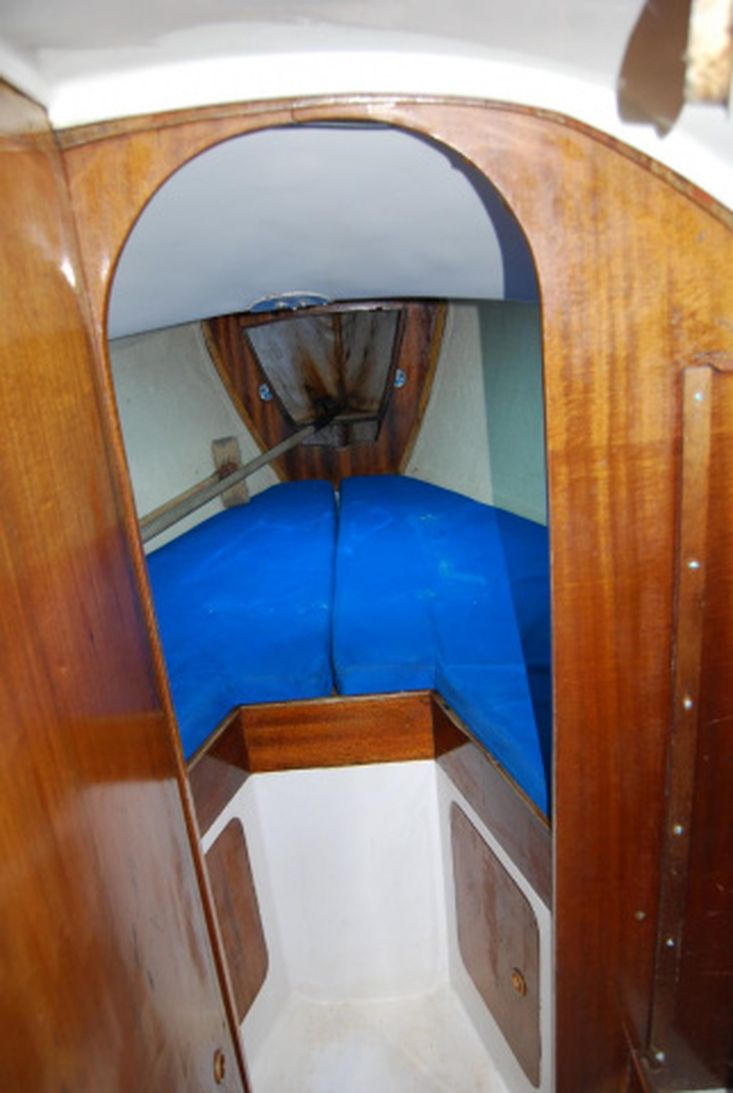 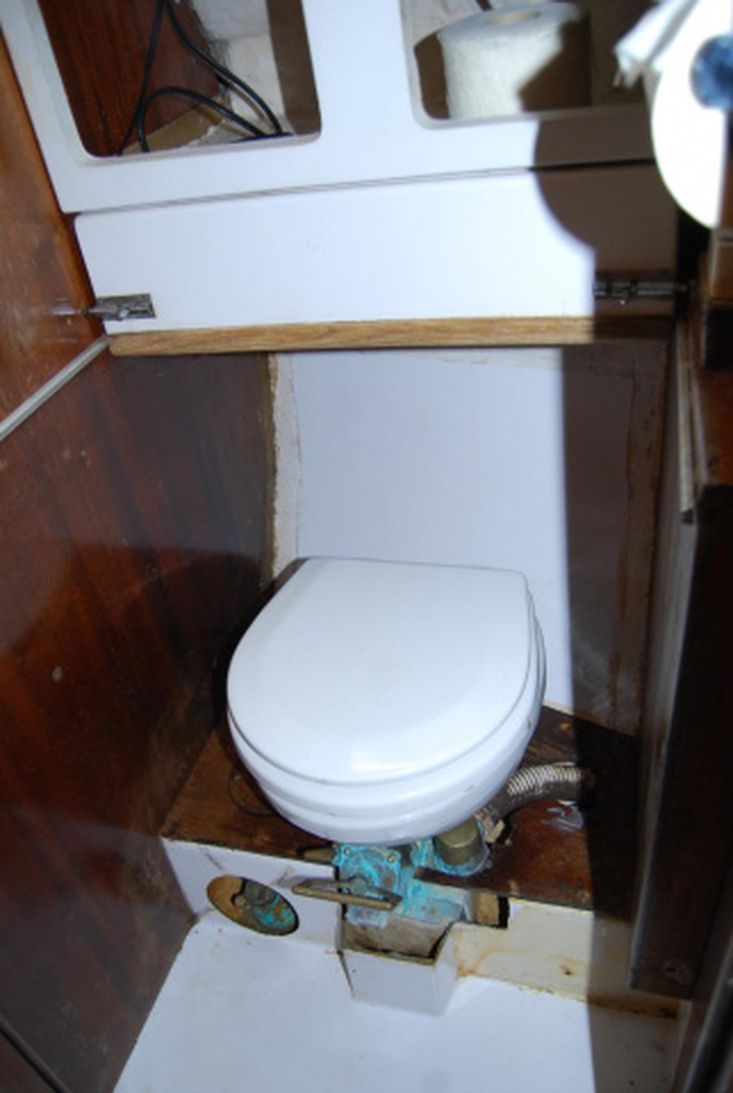 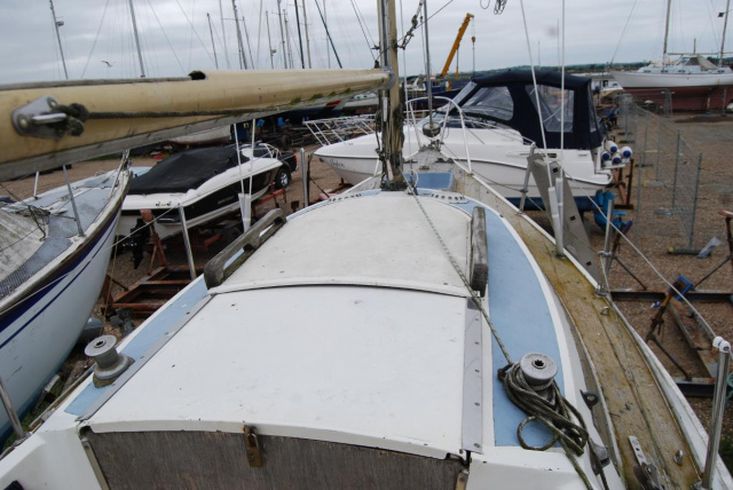 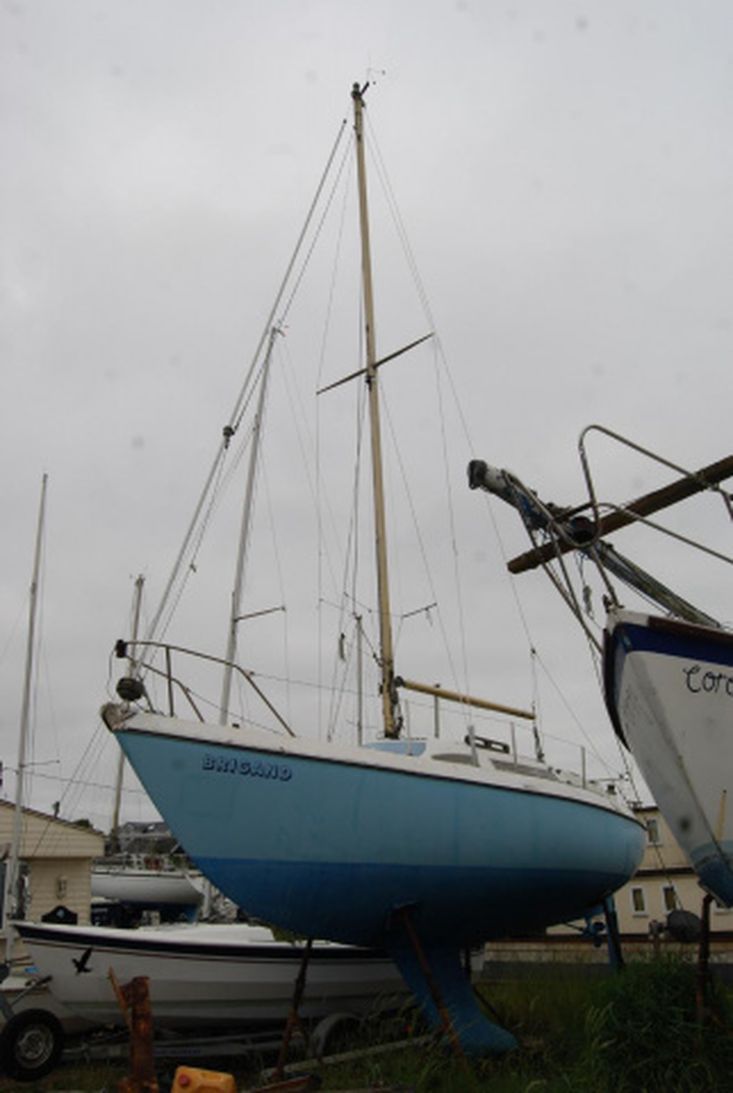 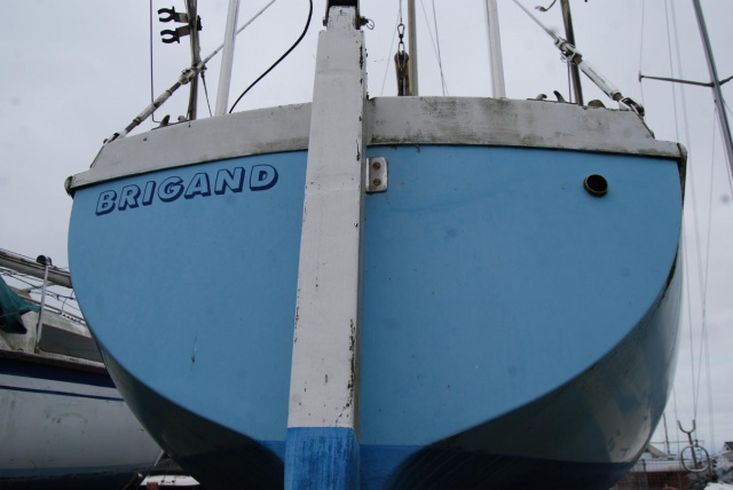 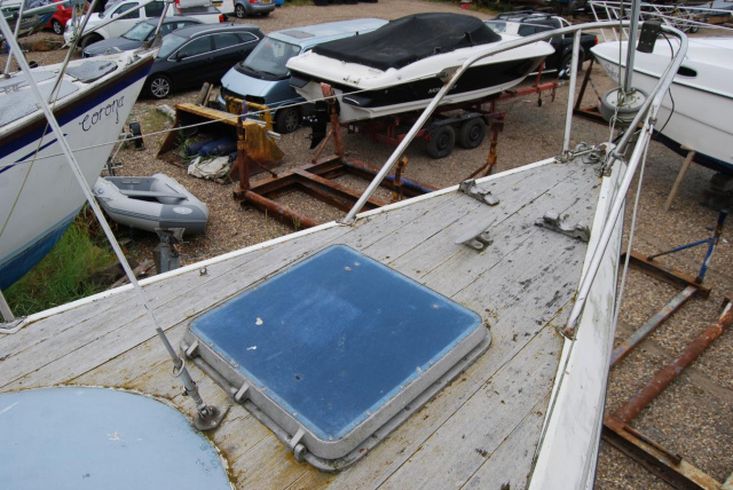 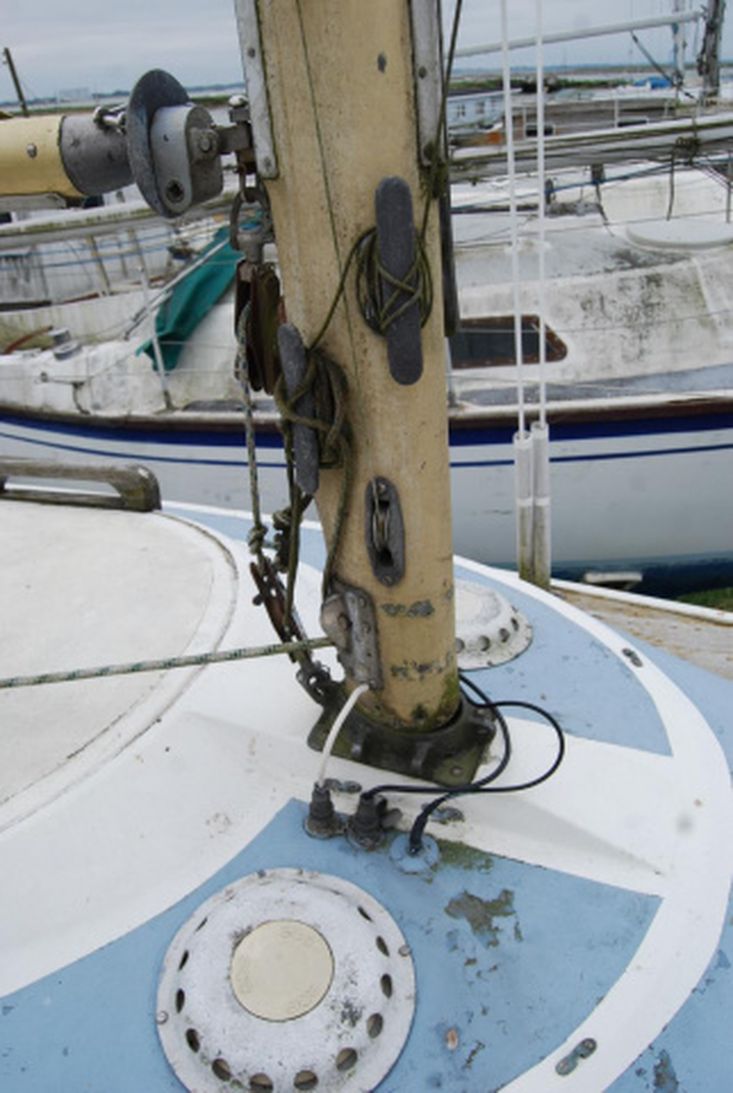 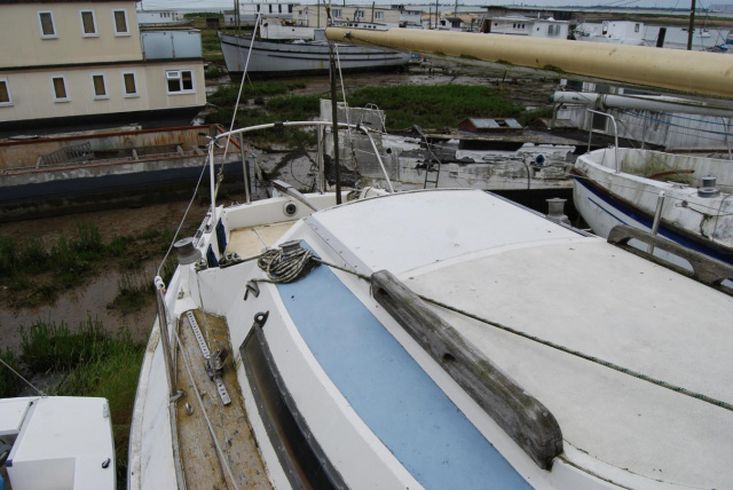 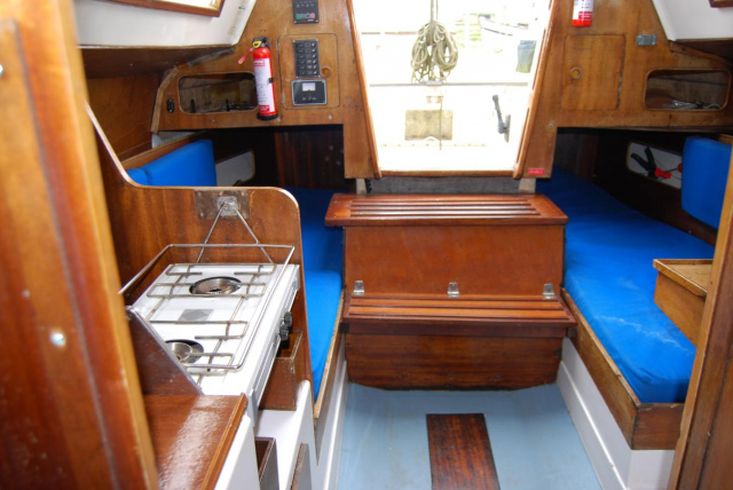 This design was commissioned by C. I. M. A. of Rome where they were built. Raymond Wall our Chief Designer in Southampton was responsible for the design. The man responsible at C.I.M.A. was Riccardo Baffigo. C.I.M.A. were responsible for the structure so did all the structural G.R.P. design work. In 1971 we also designed a slightly larger version, our Design No A572, also built by C.I.M.A. and called the Brigand 950. This in turn was the forerunner of the Nicholson 30 built at our Gosport yard from 1972.

MECHANICAL
Vetus M2.06 15hp twin cylinder inboard diesel engine. The engine was fitted new in November 1998 and has been maintained by engineers throughout. Shaft drive to 3 blade fixed propeller.

SAILS
7 sails - Main, Genoa (adapted to fit the furling jib system), working and storm jibs, spinnaker and a couple of spares. While serviceable the main will probably do a couple more seasons before needing to be replaced. Alloy mast and boom, genoa roller reefing system, blue mainsail cover. The rigging was replaced around 2000 by Griffin Marine (was based by the River Yare, Thorpe, Norwich). Spinnaker poles.

Brigand was first share-owned by three individuals in Jersey - details are on the registration document. It was then sold to the father of a great friend of mine. He sailed Brigand across the channel several times and cruised the east Anglian coast. During his ownership the boat was moored at Aldeburgh.

I became owner of Brigand around 1995/6. I was a member of the Royal Norfolk and Suffolk YC. Brigand was moored at the YC and sailed out from Lowestoft, usually south to Southwold, Aldeburgh and Harwich/Felixstowe etc. These were invariably day trips or occasional weekend ventures. In 1998 I had a new engine fitted and brought Brigand up to Brundall (on the Broads, River Yare) for this to be done. Then for several years I made occasional trips out through Yarmouth to inshore waters or sailed on the River Yare.

A friend then introduced me to sailing at West Mersea. I joined the WMYC and moved Brigand to a mooring at West Mersea Marine and since then have enjoyed sailing local waters and the Blackwater estuary. I have not raced and would describe myself as a fair-weather sailor, implying that Brigand has not been unduly stressed by adverse conditions!

Brigand has been lifted out every winter and the engine winterised by the boatyard. No accidents have occurred nor claims made.

Age finally caught up with me and my sailing companions and the sailing excursions dropped off, which prompted me to consider selling Brigand. I held on, or made limp attempts to sell, in case my children were tempted to take her on but they have developed other interests, hence the firm decision now to sell.

Boats for sale
by continent

Boats for sale
by country